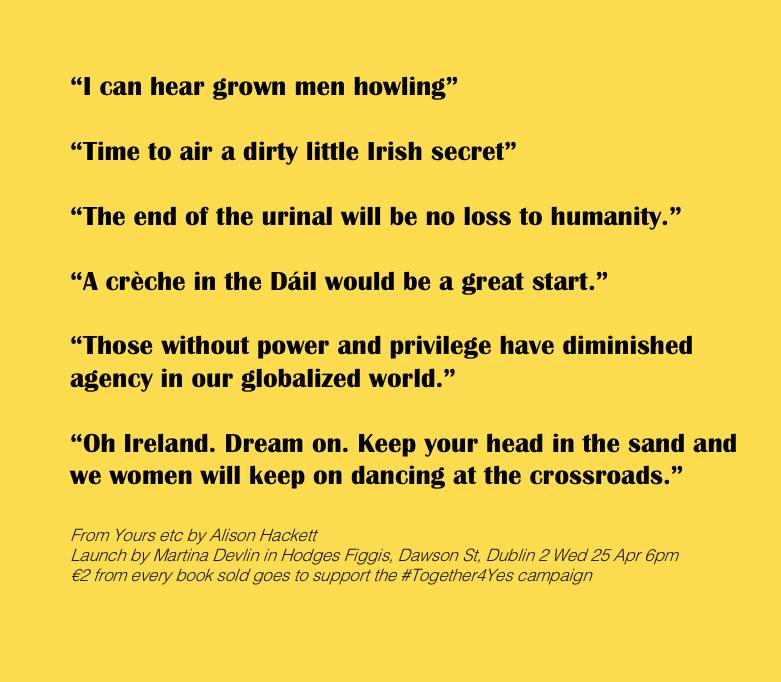 BOOK LAUNCH: “Yours etc” by Alison Hackett
Launch by Martina Devlin at 6pm in Hodges Figgis on Wednesday 25 April.

Why is it topical? It is about women, men, politics and power in 21st Century Ireland.

For every book sold at the launch Alison will donate €2 to the #TogetherforYes campaign.

At the launch Alison will be reading the letter:

“Time to air a dirty little Irish secret: in the sixties and seventies the word on the street was that if you were pregnant it was a better idea to go to a Protestant maternity hospital to have your baby. (In Dublin, this meant the Rotunda rather than Holles Street). Why? Because in the Protestant hospital they would save you, the mother, ahead of the baby if there was a problem……”

Read the rest of the letter here https://www.irishexaminer.com/viewpoints/yourview/dear-sir-readers-views-271016-427638.html

Alison Hackett’s manifesto – her little red book – is about women, men, politics and power in the 21st Century. By relentlessly sending letters to the editors of newspapers for the last seven years Alison made a bid to have her voice heard. Her letters will resonate – whether you were born at the turn of the millennium or in the middle of the last century; whether you are male or female, capitalist or socialist, luddite or progressive. She wants to “politicise women and feminise men”, to get you to think, and every now and again, to change your mind.