Official Launch of Carlow Together for Yes & Information Evening 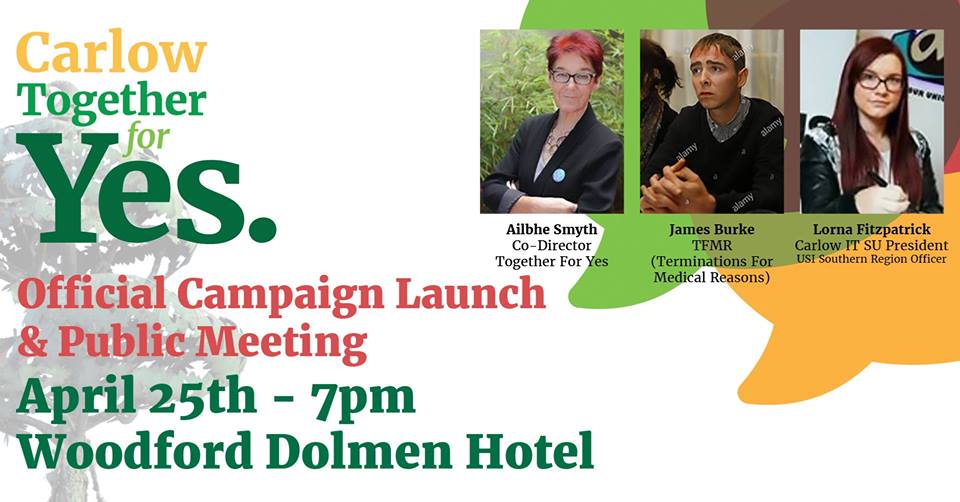 Are you unsure which way to vote in the upcoming referendum?
Would you like to hear the experts in their fields present facts?
Then come along to this.

We are thrilled to announce that Carlow Together For Yes will be holding an official campaign launch on Wednesday, April 25th, in the Woodford Dolmen Hotel, in Co. Carlow, beginning at 6pm.

This will be followed by our an Open Public Information Meeting at 7pm.

Our esteemed panel of guest speakers for the information evening will include;

We are the local, Carlow Branch of Together for Yes, a national Civic Society Campaign representing a broad coalition of interests groups.

As part of the national campaign, our volunteers are working for positive change in Ireland’s abortion laws, to provide compassion for women and men making difficult, private, decisions and to ensure safe, regulated, health-care in their own country.

Everyone who wants to understand the impact of the Eighth Amendment and what its Repeal would mean for Carlow and Ireland is most welcome to join Carlow Together For Yes and our guest speakers for an engaging and informative evening.