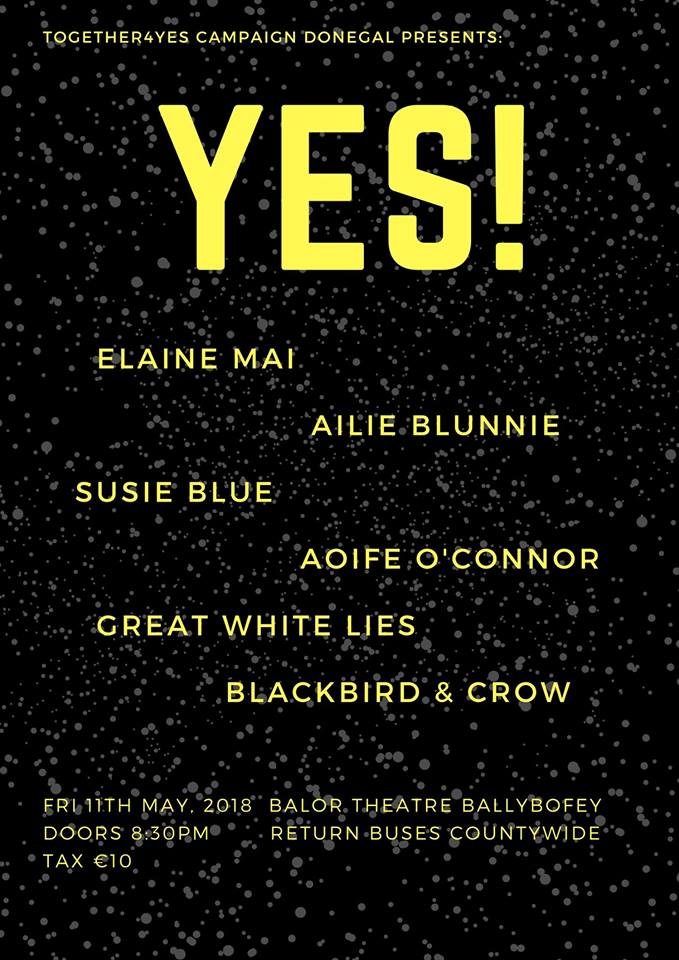 Donegal Together For Yes has gathered the most talented and vibrant acts to entertain you all while raising some funds and sharing our solidarity to repeal the 8th amendment.
We have Elaine Mai, Susie blue, AilieBlunnie, Aoife O’Connor, Great White Lies & Blackbird & Crow.

There shall be buses running from across the country & also from Derry. Tickets will be able for purchase soon via Eventbrite or you can go directly to Balor Arts Centre get yours now!

Almost three years in the making, her latest EP is a cathartic piece of work which centres around the common human experiences of grief and hope. ‘The Colour of the Night’ is out now.

‘Best tune: One of the tunes of the festival has to be Elaine Mai’s remix of Wicked Game. It absolutely killed the Body&Soul main stage on Saturday night’ (Irish Times Culture on Electric Picnic 2017)

“Susie blue has been writing and gigging for many years and now backed by a band consisting of drums, bass, guitar and synth she has really started to come to the forefront of the music scene. After releasing 2 singles with the band they have went on to perform at both Glastonbury and Electric picnic as well as performing at other voices in Dingle. Now Susie’s debut album has ups and downs of both pop anthems and alt rock tracks with massive guitar and synth. Susie blue is only just starting out, and on such a high note too.”

They are possibly best described musically as a folk blues duo and when onstage together, the Blackbird and the Crow leave nothing behind in the dressing room. The show is a blatant, honest, in your face expression of musical passion. The songs are a timeline of their own life events, delivered with the same honesty and intensity that it took to write them.
https://www.facebook.com/thelarktherobin/

Fresh from Whelan’s Ones To Watch 2018 and Templebar TradFest, Leitrim musician, Ailie Blunnie, is making waves in the new Irish music scene following the release of her début album, West to the Evening Sun (Nov. 2017, Happy Out Records)

From the release of their critically acclaimed debut ep, winning VAI Song of The Year, Great White Lies have grown from strength to strength. Their music has taken them across Ireland, LA & Canada. Gig highlights; Stendhal, YouBloom, supporting Hannah Peel at Northern Xposure and appearances on RTE and BBC television and radio.

A finalist in the Irish stage of the 2018 Funny Women Competition and set to play the first ever all-female stage at this year’s Electric Picnic. When Aoife’s not busy smelling like shite from the bogs of Donegal she’s gigging around Dublin trying to trick everyone into thinking she’s a mature grown woman who’s confident in herself and her sexuality and not a 12-year-old boy whose voice hasn’t broken just yet.