I am now a 41 year old mother of two. In 1992, aged 15, I became pregnant. I was in such a state of shock and panic that I didn’t want to tell my parents as I knew they would be so hurt and disappointment with me. I was in 5th year in school and we wore little tiny gold foetus feet on our uniform in our convent school.  I felt I had nowhere to turn. 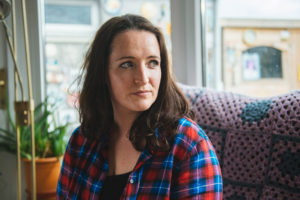 I went to the man who I was pregnant by for help. He was 22, and no help.  I then took an overdose of paracetamol as I thought I would be better off dead. It didn’t work, I was still alive.

Finally, I realised in absolute despair, I would have to tell my mum and ask for her help. I’ll never forget the night I told her, I had never seen her cry before. She cried for hours, I felt so guilty for bringing this situation to her. I told her I wanted to travel to the UK and have an abortion.

Thankfully she accepted my decision but my Dad was very upset and I could tell how disappointed he was with me.

My Mum arranged for me to see a GP in Dublin who a friend had recommended. He was very kind. He asked me what I wanted to do and if anyone was putting pressure on me to have an abortion. I told him it was the opposite; I was the one who wanted to travel. The GP must have given my mum details of a UK clinic as she booked the appointment and our boat to get there. She travelled with me and one of her friends travelled with us to support my Mum.

By the time I made it the UK, I was 13 weeks pregnant. After the procedure, I felt so relieved but I never had follow up care with a doctor or follow up counseling. In fact it was never mentioned again.

My parents wouldn’t have had a lot of spare money at the time with six children to raise so they took out a loan from a high interest finance company.  The company called to our door every Saturday morning for a long time to collect the repayment.  I felt guilt and shame each week seeing the lady call for ‘the abortion money’ – guilt that I had brought this financial stress to my parent’s door and shame that I had gotten myself into this situation.

Looking back, it was the secrecy that caused me distress as the years went by. Not being able to mention it to anyone. The judgement I felt in Irish society.  It’s only now I feel I can speak about abortion openly; only since the Citizens’ Assembly and their recommendations. I will not be made to feel ashamed any more. I was a child. I was taken advantage of and I made a mistake, but that didn’t mean that I had to have a forced pregnancy.

I spoke to my parents about the abortion for the first time recently.  I needed to thank them for their support at the time.  Their only concern was that I was happy with my decision.  I was able to tell them that I have always been happy with the decision and I have never regretted it.

Nicola told her story to Philip Boucher-Hayes on RTE Drivetime.